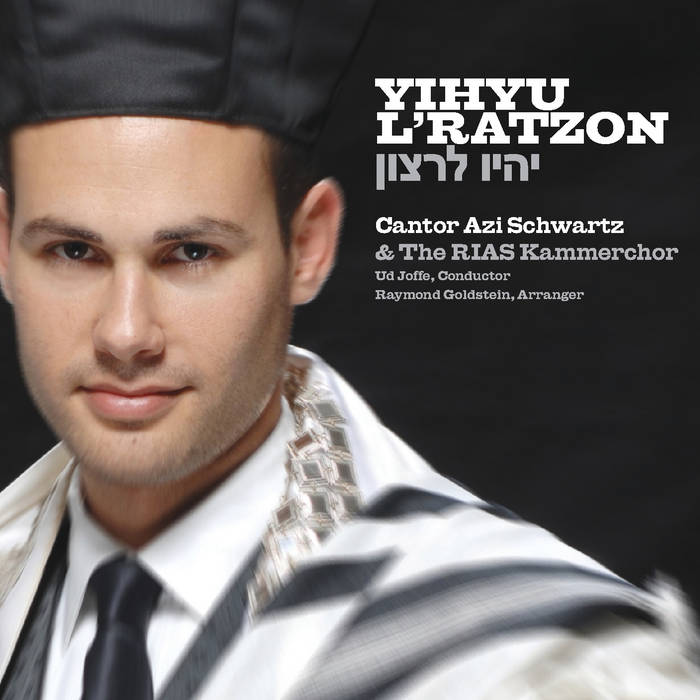 This extraordinary CD of Jewish Liturgical Music brings you a selection of Choral- Cantorial music with impeccable quality, and it represents the finest in both composition and performance purity. The album features the young Israeli-born Cantor Azi Schwartz, one of the finest cantors of our time, singing together with the RIAS Kammerchor under the baton of Maestro Ud Joffe in the Rykestrasse Synagogue in Berlin. All of the music, almost entirely a cappella, was recorded in this magnificently restored edifice (built 1903 – 4, restored 2006 – 7), Germany’s largest synagogue. During the first three decades of the 20th Century, the Rykestrasse Synagogue was among the most celebrated of Choral Synagogues in Western Europe. During that period, these synagogues produced gifted composers who were equally fluent in both knowledge of synagogue music tradition, as well as worldly music sophistication. The influence of the 19th Century masters continued to develop enormously in the first third of the 20th Century with beautiful prayer music by Jacob Dymont in Berlin, Julius Kaufmann in Nuremberg, Emanuel Kirschner in Munich, Leon Kornitzer in Hamburg, Samuel Lampel in Leipzig, Arno Nadel — originally from Vilna, Koenigsberg, and then — in Berlin, as well as J. Benno Peissachowitsch in Frankfurt. Yet, their world was extinguished abruptly with Kristallnacht in 1938 and the Holocaust that followed, and their artistic contributions to Jewish prayer were largely forgotten. Nevertheless, the Rykestrasse Synagogue flourished with standards of fine cantors, choirs and music not only prior to the Holocaust, but also in some diminished capacity after 1945, and through some periods of the Communist era. Today, its renewed elegance and large size have brought important concerts that have helped rebuild its reputation. The quality of synagogue music in the late 19th and early 20th Century Western Europe also had parallels in major centers of Eastern Europe, where the grandeur of cantorial tradition became merged with choral splendor. It also spread to England, the U.S.A. and Canada, through musicians, cantors and composers who emigrated there from Europe and brought new synagogue sophistication with them. Simultaneously, other top quality cantors, choirs and composers began to flourish in Eretz Yisrael, which has continued to develop. It is this merger of high quality cultures from the finest traditions of all these regions that constitutes the ten magnificent selections on this recording! We hear Berlin in Lewandowski’s “P’tach Lanu Shaar”; Odessa through Dunajewski’s “Hashkiveinu” and Nowakowsky’s “W’schomru”; the Spanish-Portuguese culture in England with David de Sola’s “Adon Olam”; development in America from Eastern Europe with Zilberts’ “Mimkom’cha” and Helfman’s “Adonai Adonai”; the unrivaled “Yihyu L’ratzon” from the first complete “Sacred Service” in America, composed by renowned secular composer Ernest Bloch, originally from Switzerland; and from Israel, the classicallyimbued “Hayom Harat Olam” by our contemporary gifted colleague Eli Jaffe; also from Eastern Europe, U.S.A. and Israel, we are treated to Cantor Leib Glantz’s famous “Sh’ma Yisrael” with its unique coloratura and trills, and enhanced with choir — all arranged by the outstanding composer Raymond Goldstein of Israel. The history of European Choral Synagogues, with their cultural crossovers, is actually closely connected to New York City’s Park Avenue Synagogue, where Cantor Azi Schwartz is now Cantor and Music Director; and it is the synagogue in which the composers and liturgical styles heard on this recording have continued to flourish and develop for more than a century! It also happens to be the congregation which I was privileged to serve as Senior Cantor for thirty-three years, prior to Cantor Schwartz’ arrival. So, one can understand how thrilling it is for me to see and experience his leadership in this new role as my successor! Azi is the new link to this chain, with his vocal, musical and artistic prowess. For our large congregation, and for the wider community, there is great pleasure and anticipation in having this dynamic star add new links to a unique historic chain. You are now invited to sit back, relax, and treat yourself to an experience of soulful and
spiritual beauty.