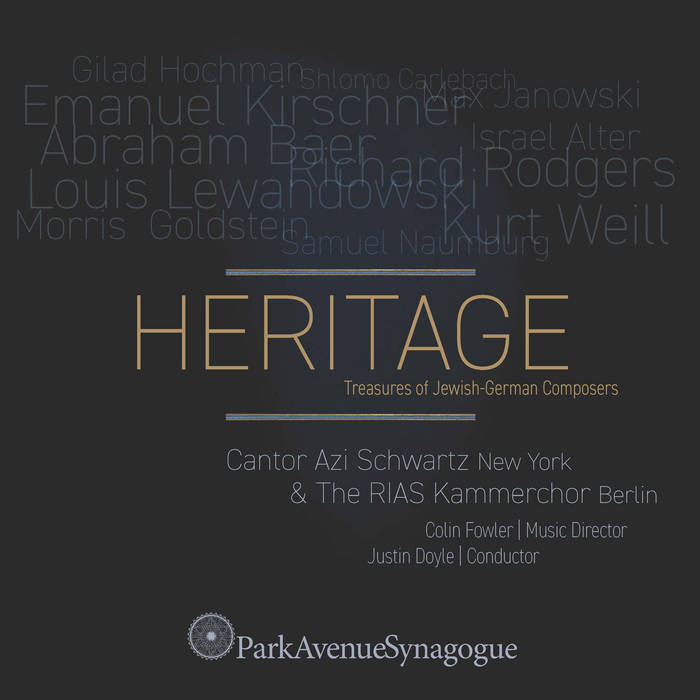 This album features music by Jewish composers of German origins performed by world-renowned Cantor Azi Schwartz of Park Avenue Synagogue in New York, and RIAS Kammerchor, Germany’s National Radio Choir of Berlin and one of the world’s leading choirs. Heritage embarks on an intriguing musical journey, beginning with the forefathers of modern synagogue music in Germany, including Louis Lewandowski and Emanuel Kirschner. It continues with their followers in America, including Max Janowski and Shlomo Carlebach, who reimagined the American soundscape of Jewish music. This project also highlights Jewish stage composers of Germanic origin, including Kurt Weill and Richard Rodgers, who produced some of Broadway’s greatest hits and played a critical role in shaping American popular culture in the first half of the 20th century.

Heritage celebrates some of the greatest music composed in 20th century, and highlights how subsequent generations have given it new vibrancy in the 21st century. This album includes a newly commissioned piece by Gilad Hochman – an award-winning, young, Jewish composer residing in Berlin – plus a dynamic and modern arrangement of Israel’s national anthem to honor the 70th anniversary of the state of Israel.

Heritage honors the founders of Park Avenue Synagogue, German Jewish immigrants, who established the congregation in 1882. The musical heritage they brought with them from Germany has been at the heart of our services ever since, serving as an inspiring foundation for our community’s worship experience.
Even as we seek to develop our ever-evolving worship services, this history remains present and relevant. We continue to acknowledge and honor it, and carry it with us as we look towards the future.